HomeSportsRonaldo's ex in Pike's arms, a photo in Paris conquers the network
Sports

Ronaldo’s ex in Pike’s arms, a photo in Paris conquers the network 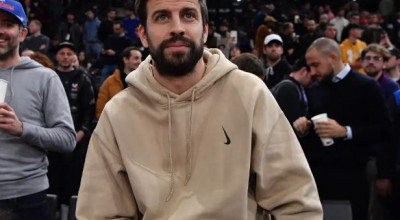 Gerard Pique again in the center of attention of the pink media. A photo of him from Paris next to Irina Shaik, the ex-girlfriend of Cristiano Ronaldo, is doing the rounds of the network.

Pike and Irina were spotted posing together during an NBA game in France. Apparently, the former defender of Barcelona is trying to make Shakira jealous, after the separation, due to a betrayal discovered between the couple.

It remains to be seen if Pike and Irina just took a friendly photo, or if a romance has started between them…

Share
Facebook
Twitter
Pinterest
WhatsApp
Previous article
Klopp reaches 1,000 games in his coaching career: It’s a big event for me, it’s the best job in the world
Next article
15 games without defeat, Newcastle with a historical record