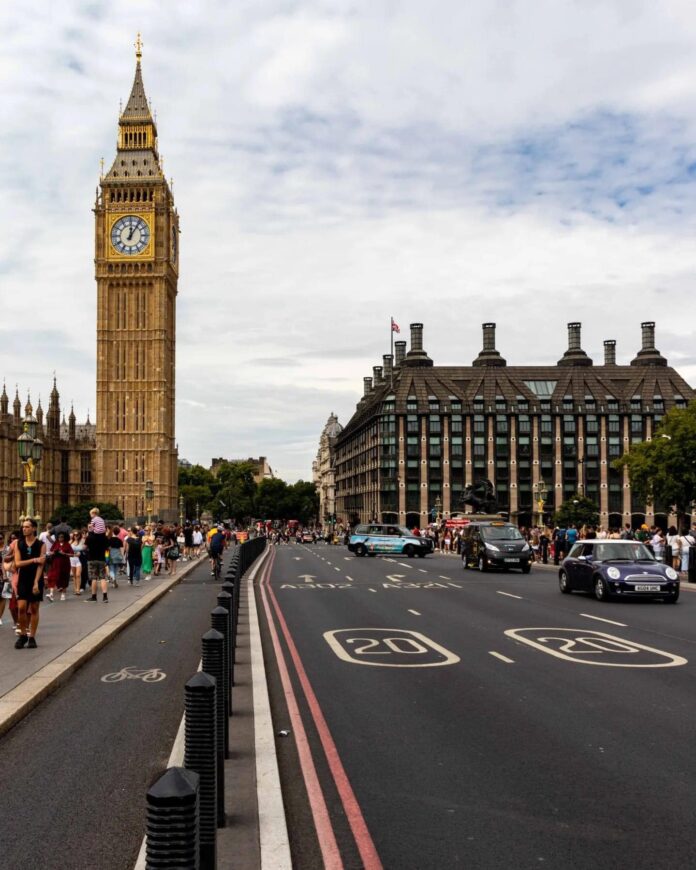 London, the capital of England and the United Kingdom, is a 21st-century city with history stretching back to Roman times. At its centre stand the imposing Houses of Parliament, the iconic ‘Big Ben’ clock tower and Westminster Abbey, site of British monarch coronations. Across the Thames River, the London Eye observation wheel provides panoramic views of the South Bank cultural complex, and the entire city.

London is one of the world’s most mesmerizing cities. Modern architectural marvels like the Shard line ancient laneways peppered with historic monuments, high-end shops, and award-winning theaters. The picturesque streets wind their way around renowned attractions like Buckingham Palace, Westminster Abbey, and St. Paul’s Cathedral, causing visitors to gape at their beauty and exhaust their phone’s photo storage.

With so many impressive tourist attractions and captivating things to do, it’s no wonder London is one of the most visited cities worldwide, receiving over 20 million tourists each year. Britain’s bustling capital offers something for everyone, including shopaholics, foodies, adventurists, historians, and kids; but this can make it tough to choose what to do first.

Should you hit one of the top museums (many of which are free to enter), enjoy a picnic in one of the expansive parks, tour a royal palace, or wander around a breathtaking garden? Perhaps you’d prefer to take in a show, ride a horse through a grove, take a flight on the London Eye, or enjoy a traditional afternoon tea at Harrods.

Use our list of the best attractions and things to do in London to help decide what to see and do in this phenomenal city you’ll want to visit again and again.

Visit Buckingham Palace and Watch the Changing of the Guard

One of Britain’s most iconic buildings, Buckingham Palace is also the scene of London’s most popular display of pomp and circumstance, the Changing of the Guard. Drawing crowds at 11:30am regardless of the season, this colorful and free display of precision marching and music also takes place at St. James’s Palace, after which you can follow the band along The Mall as they march between sites.

Buckingham Palace was built in 1837 and has been the London residence of the Royal Family since Queen Victoria’s accession. If you’re wondering whether the Queen is in, look at the flagpole atop the building: if the royal standard is flying day and night, she’s at home. On special state occasions, she and members of the Royal Family may even emerge on the central balcony.

When the Queen’s away at her summer palace in Scotland, visitors can purchase tickets for tours of the State Rooms, the Queen’s Gallery, and the Royal Mews.

From prison to palace, treasure vault to private zoo, the magnificent Tower of London has fulfilled many different roles over the centuries. One of Britain’s most iconic structures, this spectacular World Heritage Site offers hours of fascination for visitors curious about the country’s rich history – after all, so much of it happened here. Inside the massive White Tower, built in 1078 by William the Conqueror, is the 17th-century Line of Kings with its remarkable displays of royal armaments and armor.

Other highlights include the famous Crown Jewels exhibition, the Beefeaters, the Royal Mint, and gruesome exhibits about the executions that took place on the grounds. The Bloody Tower presents stories of ancient torture, and you can learn about the mystery of two princes who disappeared many years ago.

The adjacent Tower Bridge, its two huge towers rising 200 feet above the River Thames, is one of London’s best-known landmarks (fascinating behind-the-scenes tours are available). Walk across for the best Tower views, as well as a glimpse of London Bridge (which many mistakenly believe Tower Bridge to be) in the distance farther along the Thames. At the south side of the bridge, you’ll find Butler’s Wharf, a funky section of town boasting multiple restaurants.

For the best use of your time, especially during the busy summer season, purchase the Tower of London Entrance Ticket Including Crown Jewels and Beefeater Tour in advance, to bypass the ticket office lines. This pass guarantees the lowest price, helps avoid the crowds, and saves time and hassle.

Get Captivated by Big Ben and the Houses of Parliament

Nothing screams “London” more emphatically than the 318-foot tower housing the giant clock and its resounding bell known as Big Ben. It’s as iconic a landmark as Tower Bridge, and the tolling of Big Ben is known throughout the world as the time signal of the BBC. Below it, stretching along the Thames, are the Houses of Parliament, seat of Britain’s government for many centuries and once the site of the royal Westminster Palace occupied by William the Conqueror.

The best view can be had by crossing Westminster Bridge and looking back. Or, turn left after crossing the bridge and walk along the path towards the SEA LIFE London Aquarium (a fun spot to take kids). Gather your crew along the wall for a perfect photo with Big Ben in the background.

Tours of the parliament buildings offer a unique chance to see real-time debates and lively political discussions. From Parliament Square, Whitehall is lined by so many government buildings that its name has become synonymous with the British government.

Two of London’s best-known tourist spots, Piccadilly Circus and Trafalgar Square lie not far apart and mark the gateways to Soho, London’s lively theater and entertainment district. The walk from one to the other is truly enjoyable, lined with eclectic boutiques, tasty cafés, ice-cream shops, and winding laneways evoking a bygone era when only horses and buggies traipsed through these historic streets.

Trafalgar Square was built to commemorate Lord Horatio Nelson’s victory over the French and Spanish at Trafalgar in 1805. Nelson’s Column, a 183-foot granite monument, overlooks the square’s fountains and bronze reliefs, which were cast from French cannons. Admiralty Arch, St. Martin-in-the-Fields, and the National Gallery surround the square.

Among the most fascinating and evocative of London’s historic sites is the perfectly preserved nerve-center from which Prime Minister Winston Churchill directed the British military campaigns and the defense of his homeland throughout World War II. Their Spartan simplicity and cramped conditions underline the desperate position of England as the Nazi grip tightened across Europe.

You’ll see the tiny cubicle where Churchill slept and the improvised radio studio where he broadcast his famous wartime speeches. Simple details, such as Clementine Churchill’s knitting wool marking the front lines on a map of Europe, bring the era to life as no other museum could possibly do. Audioguides are available (a thorough self-guided tour takes about 90 minutes), and a café and bookshop are located on the premises.

Two other related London attractions worth visiting are also operated by the Imperial War Museum. Located a short distance from the popular Southbank cultural district, the Imperial War Museum London can easily occupy the best part of a day with its fascinating exhibits and collections of military vehicles, weapons, and aircraft. The other must-see, HMS Belfast, is a well-preserved WWII-era cruiser that served during D-Day and can be explored as part of a guided or self-guided tour.

Bremen – a picturesque city known for its striking Hanseatic buildings